Even though my life has gone on without you
I often think, “Gayle would have liked this”

Now a year later, my husband and I
Stepped foot for the first time into our new home

I know you would have liked it
It’s bright and open, sunny and cheery

It’s been a year now
God has brought many changes, more than I could have ever imagined

Today is one year since my mother Gayle Lorenat died. Even though the last few years were hard because of Alzheimer’s I sure do miss her. 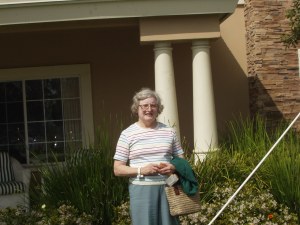 Slowly
Eventually all
Would be taken from her

Even there
Blessings were found
In the midst of Alzheimer’s

My mother Gayle Lorenat feared Alzheimer’s because her sister had died from it. She saw its effects and the devastation first hand. I hated it because it took a smart, bright, proper woman…and robbed her of dignity. Yet at the end of her life…after six years of Alzheimer’s I had to admit…there were a few blessings from God in the midst. One of those blessings was that my mother who had never been one to be affectionate or say I love you was finally able to freely express love.

The picture above was taken of my mother, Gayle Lorenat shortly after we moved her into Brighton Gardens. She was more with it at that time and tried to give the appearance of normal. She had to wear a bracelet that would set off an alarm because she liked to “escape”. I called it her “LoJack” bracelet. She would walk away and have no idea how to get back. She was unable to communicate coherently. 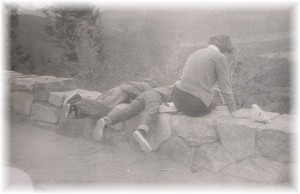 Once upon a day,
I was your mother.

Far away,
In a foreign land,
We adopted you, took you in,
Made you part of our family.

When your own mother,
Had left you, abandoned you,
To a precarious uncertain future,
I took you in.

I mothered you,
I loved you,
I supported you,
I encouraged you.

Once upon a day,
You visited,
You called,
You cared and were there…but that was before Alzheimer’s set in.

Today I forget,
Even who I am,
Thinking clearly,
A thing of the past.

I might not recognize you,
But I’ll know you,
These days I might not be able to do anything for you,
But I need you.

So far away,
Birthday, Mothers Day, even everyday,
Not a card, not a call, nor a visit,
You tell yourself it’s too hard to see me this way.

Where are you?
How long has it been?
What do you tell yourself, to ease your conscience?
Now that you’ve abandoned me!

Once upon a day,
You loved me too.

Each Sunday after church I go over to see my mom Gayle who is in an assisted living place for Alzheimer’s patients. She was diagnosed with Alzheimer’s five years ago. With the foresight of hindsight it was easy to see that she had this for sometime…it just wasn’t bad enough to interfere with her daily functioning to the point of having to take control of her care.

It seems so long ago now. These days I’m most curious as to know what’s going on in that mind of hers. As her disease has progressed she has her ability to have a conversation that makes sense has diminished. She has days where she is more with it than others…but it varies…and her ability to function continues to decline.

Recently the nurses told me that Gayle likes to write. To keep her occupied…they’ll give her a sheet of paper and pen and let her write to her heart’s content. Normally Gayle won’t let them see what she’s written. Instead she hides the paper and goes to her room, tears up the paper and throws it away. I asked if they would try to get some of those letters she writes…and they have been able to snag some of them for me. Her handwriting is at times difficult to read and her thoughts are like her conversation…some what gibberish and not always based on reality. On occasion…there will be something profound or gripping.

The above picture is from a letter I got from the nurses yesterday. Most of the letter rambles on about who knows what…but the last couple of paragraphs she kept writing “Write to me and I’ll write you back. Write to me. Write to me.”

While the person who once was my mother has all but disappeared…the above letter is all too telling.

I am most grateful that she has found favor with the nurses. She is usually rather chipper and funny. I also learned recently that Gayle likes to play Gin Rummy…and at night she plays cards with the nurses and frequently wins.

Now you have a little picture of why Gayle was kicked out of a Baptist College in her youth. Between the dancing, smoking and card playing…not to mention the boys…she wasn’t quite ready for a prim and proper existence at a Baptist College back in the 1930’s.

There are days…when Gayle is being difficult that I fully understand why my grandmother noted that Gayle got a number of spankings as a child. She still likes to push the envelope. Contrasted with her sister Joyce…Gayle was a bit of a rebel.

The above poem may express some of what Gayle feels and why at times I feel frustrated and perplexed.

So many folks don’t feel comfortable in nursing homes or assisted living places. To some extend when you enter these places you feel the pall of once vibrant healthy people…now waiting to die. Most folks that check in will die there. Honestly…I can’t say I feel comfortable there. But it’s like anything…the more you do it…the more familiar it gets.

It’s certainly not what Gayle signed up for…she is now living out her nightmare. It’s certainly not what I signed up for. But isn’t that kind of what life is like? I think we are most fortunate when we get the good stuff in addition to the stinky. Hopefully at the end of the day…the good will outweigh the bad. When the bad is overwhelming…that’s when I’m aware that God is carrying me through.